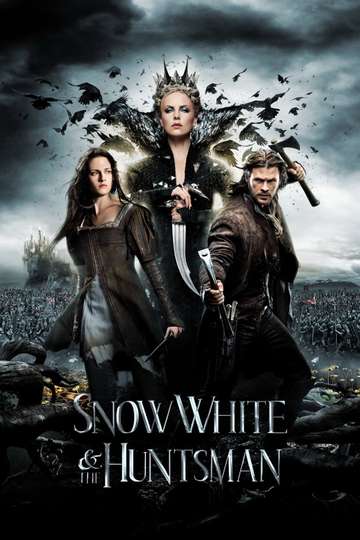 Snow White and the Huntsman (2012)Stream and Watch Online

Looking to feast your eyes on 'Snow White and the Huntsman' in the comfort of your own home? Finding a streaming service to buy, rent, download, or watch the Rupert Sanders-directed movie via subscription can be a challenge, so we here at Moviefone want to do the heavy lifting.

Read on for a listing of streaming and cable services - including rental, purchase, and subscription alternatives - along with the availability of 'Snow White and the Huntsman' on each platform when they are available. Now, before we get into the fundamentals of how you can watch 'Snow White and the Huntsman' right now, here are some specifics about the Universal Pictures, Roth Films fantasy flick.

Released June 1st, 2012, 'Snow White and the Huntsman' stars Kristen Stewart, Chris Hemsworth, Charlize Theron, Sam Claflin The PG-13 movie has a runtime of about 2 hr 7 min, and received a user score of 60 (out of 100) on TMDb, which collated reviews from 7,063 respected users.

What, so now you want to know what the movie's about? Here's the plot: "After the Evil Queen marries the King, she performs a violent coup in which the King is murdered and his daughter, Snow White, is taken captive. Almost a decade later, a grown Snow White is still in the clutches of the Queen. In order to obtain immortality, The Evil Queen needs the heart of Snow White. After Snow escapes the castle, the Queen sends the Huntsman to find her in the Dark Forest."

Ice Age: Continental Drift
"The End of the World is Just the Tip of the Iceberg."

The Twilight Saga: New Moon
"The Next Chapter Begins."

The Twilight Saga: Eclipse
"It all begins... with a choice."

Harry Potter and the Deathly Hallows: Part 1
"One Way… One Fate… One Hero."

The Huntsman: Winter's War
"The story before Snow White"

Oz the Great and Powerful
"In Oz, nothing is what it seems."
The Chronicles of Narnia: The Voyage of the Dawn Treader
"Return to magic. Return to hope. Return to Narnia."

Sherlock Holmes: A Game of Shadows
"The game is afoot."
Clash of the Titans
"Titans will clash."

Fantastic Four: Rise of the Silver Surfer
"Discover the secret of the Surfer."
Pirates of the Caribbean: On Stranger Tides
"Live Forever Or Die Trying."

Alice in Wonderland
"You're invited to a very important date."
Twilight
"When you can live forever, what do you live for?"

The Twilight Saga: Breaking Dawn - Part 2
"The epic finale that will live forever"