McBrayer and Santomero talk about being inspired by Mr. Rogers, and having music from OK Go.

The new Apple TV+ series ‘Hello, Jack! The Kindness Show’ is aimed at pre-schoolers and stars Jack McBrayer as he inspires kids to solve problems with “The Three Cs” - caring, connecting, and cascading. Executive Producer Angela Santomero co-created the series with McBrayer, and they both sat down to talk to Moviefone about their new series.

Moviefone: Well, Jack, tell me about where the idea came from.

Jack McBrayer: Well, it did come from a very personal place for me, where I was just noticing how grownups were behaving towards each other. There seemed to be a lack of compassion, a lack of civility, a lack of kindness. And so I thought about when we, as humans, learn these lessons and I started thinking about my preschool years and the television programs that I grew up with, specifically ‘Mister Rogers' Neighborhood,’ and how learning those social and emotional lessons... maybe every now and then we need to be reminded of them. So I'm happy to pick up the baton.

MF: Especially during the pandemic. I don't know how this timed out. Was this idea before, or was this during this time when we've been isolated at home?

McBrayer: Long before, long before. I think I met with Apple in 2018 and the good news is over the past couple of years, we have been able to, even through Zoom, write the scripts, cast the show, get a lot of work done before we actually try to get in there and film.

MF: So Angela, Jack comes to you with this idea, and it's very specific. It's not like, "Let's do a kid show, and we're going to do A-B-Cs and one-two-threes and also learn about some life lessons." He says, "It's kindness." What's your reaction?

Angela Santomero: You know, for me, kindness has always been at the foundation of everything that I've ever done, right? And so it was just serendipitous to meet and to bond over our love of Fred Rogers, and what can we do for kids today? And then it really became the idea that kindness is the tool to tell the great stories that we wanted to tell and to build out this gorgeous world. We had our writing meetings and Jack's in our meetings, and then see the visuals that came out after that because all of these great ideas to create this world and showcase, visually, kindness growing was really the spark and the excitement for the show.

MF: Jack, can you try to describe visually for our audience? What it looks like, the show?

McBrayer: Imagine a pastel dream. No, it's very gentle. It's very kid friendly. It is very pastel, but it reminded me of just this magical dream world in a way. It was fun to have not only our younger actors join us every day, but whenever we'd have any background or guests come in, they were just so taken by everything. And I'm including the wardrobe, the props, all of the design elements came together to create this sort of dream world. But we wanted it to feel realistic enough where kids at home would want to come and visit us, so the invitation stands. 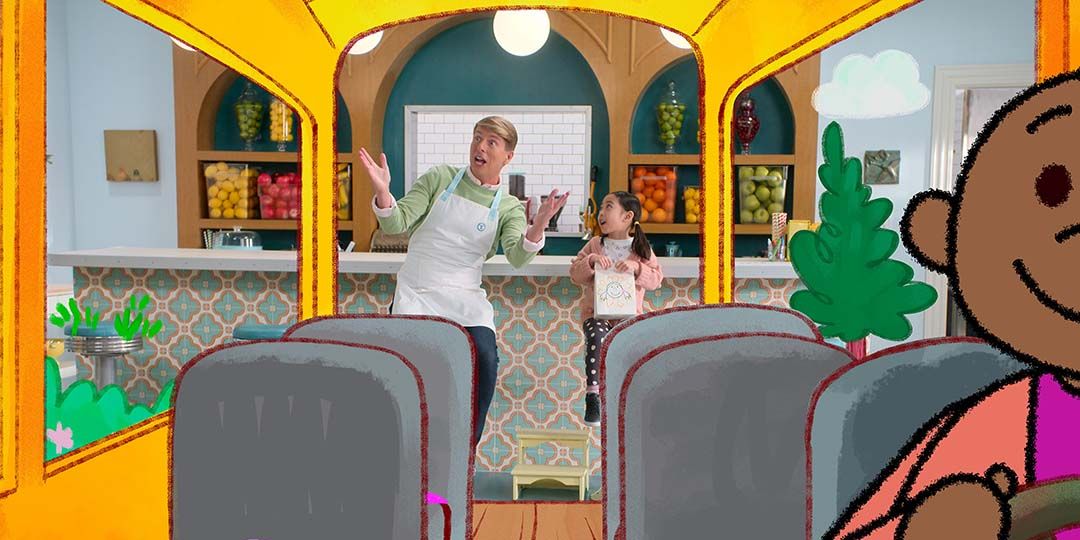 Santomero: And then I have to say the inspiration of ‘Gilmore Girls’ that there's this gorgeous neighborhood that everybody knows each other, that they're always saying hello and all that kind of stuff. That's also what was in our head, I think a little bit.

MF: Yeah, I really love that community feeling, and I wore my pastel-y lavender sweater thinking about The Hummingbird Café, and Jack, your character, because you're always kind of in sweaters...

MF: Kind of the Mr. Rogers feel, right? Angela, what age group are you aiming for?

Santomero: It's preschool. Those are the best. That's the best age. Preschool and then co-viewing for parents, right? Like sitting and snuggling and watching and asking questions. That's what we hope.

MF: And Jack, there are the three Cs that you're trying to hit in this show. So what are those three Cs?

MF: Angela, I'm sure you have some advisors for this show. What does that all entail?

Santomero: We do. We have an amazing advisor. I'll let Jack speak to that because it was his excitement to get Dr. Junlei Li, but we also have a formative research department. So every idea, every installation of a script, as we start to visualize the script, we bring it into our research department who takes it up to kids and watches them lean in and get excited. And we also rewrite and we re-talk about what we're going to be doing, so that's really exciting as well. And then Dr. Junlei Li...

McBrayer:So we have Dr. Junlei Li come in as a consultant. This man is a legend in children, childhood education and development. I had met him at a convention. His lecture was what would Fred Rogers think about current day? And to me, it was like a light from heaven. I was like, I want to know everything this man can teach me. He's been a great, great asset for this project.

MF: Okay, before we go, we need to talk about songs, original songs and the singing. So what are those original songs? And what's it like? You do a lot of singing.

McBrayer: I do, but the music come from this incredible band, OK Go. Check them out, watch their amazing videos. It was such an honor to have them come on and create an original song for every episode, as well as our theme song, the closing song. I've been a fan of theirs for so long. So, I mean, I think the first part was me just trying to act normal. Like yes, yes, what a wonderful idea. "Hey, when you sang this one song..." I was totally fanboying out, but OK Go was just a tremendous get for us.

MF: I know you've done voice-overs for some kids shows, but in general we don't think about you acting live, doing kid shows. So it's a break. It's a break from what we're used to, and how is that for you?

McBrayer: Well, I mean the good news is I have experience doing live action through shows like ‘30 Rock’ and then the voice acting is super fun. And so I was real happy to kind of bring this together where children can watch a grown man address them directly through the screen. And again, hearkening back to Fred Rogers, be that source of listening and caring and connecting and understanding. I was happy to do that. Very happy to do it.

‘Hello, Jack! The Kindness Show’ is now on Apple TV+.