Iconic director Adrian Lyne’s first movie in twenty-years almost falls into the “so bad its good” category but is ultimately unsatisfying and features truly baffling performances from Ben Affleck and Ana de Armas. 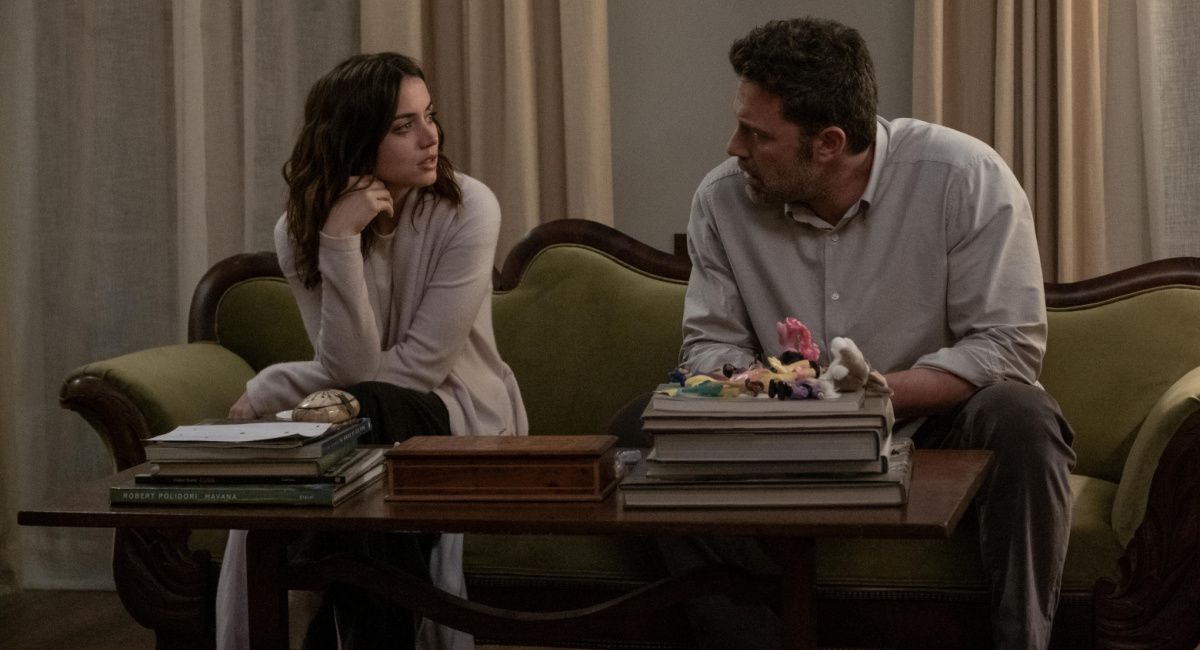 The result is a strange and uneven movie that at times is almost entertaining only because it falls into the it's "so bad it's good” category, but ultimately is just a hot mess!

The movie begins by introducing us to Vic Van Allen (Affleck), a computer genius who retired young because he invented the microchip used in drones. His wife, the beautiful and captivating Melinda (de Armas) enjoys parading her affairs with younger men around in front of Vic and their neighbors at their frequent parties in their Louisiana home. Their friends are aware of Melinda’s infidelities, and feel bad for Vic, who seems to just put up with it.

At one of their parties, where Melinda is showing off a new boyfriend, Vic confronts him and makes a wild confession. He admits that he’s responsible for the recent disappearance of Melinda’s last boyfriend, and then confesses to his murder. The young man, understandably concerned, tells Vic’s confession to the rest of the party, who just laugh it off, believing that Vic is not capable of such a thing. Melinda invites her new lover to dinner with her and Vic to assure him that Vic had nothing to do with the other man’s disappearance, but after dinner, he soon disappears himself.

After an “accident” in the pool during one of their parties leaves Melinda’s piano teacher (who she was having an affair with) dead, aspiring novelist Don Wilson (Tracy Letts), who is new in town begins to investigate. He’s heard the rumors about Melinda’s last two lovers going missing, and believes that Vic not only killed them, but the piano teacher as well.

Soon after, Melinda reconnects with a man she was in a relationship before she met Vic, Tony Cameron (Finn Wittrock). Melinda and Vic’s usual game begins again, inviting Tony to dinner, and then having Vic watch helplessly while Melinda flirts with him. With Wilson watching his every move, Vic makes one last attempt to save his marriage and cover up the sins of his past.

‘Deep Water’ had a very troubled production with several delays and the film ultimately skipping theaters and heading to Hulu. I won’t get in to all of that other than to say, you can tell from watching the movie. It’s an odd film, at times not even feeling completely finished. There are characters, situations, and themes introduced that never get resolved or explained.

To begin with, the entire conceit of the movie seems outdated, and watching Ben Affleck’s Vic be humiliated by his wife is just not fun for the audience. Nor is it fun to see him killing her lovers for no other crime than infidelity. It actually starts off fairly intriguing, with the audience guessing if Vic is really the killer or not. But once Lyne makes it abundantly clear that he is, any mystery the movie may have had is lost.

Even though you sympathize with Vic and what he’s going through, he becomes an unlikable character once you realize the truth. Melinda too is an unlikable character, because if you are to care for Vic, then you have to dislike the way she’s treating him. Ultimately, you have now alienated the audience from caring about either of your two main characters.

I think Ana de Armas is an amazing actress and she has stolen the show in several recent films including ‘Blade Runner 2049,’ ‘Knives Out,’ and ‘No Time to Die.’ But here, the actress’s charm is lost inside this otherwise unlikable, two-dimensional character of Melinda, who is never really elevated past the level of just being the “unfaithful wife.” While it’s never really clear if Melinda is award or not that Vic is killing her boyfriends, the character seems to enjoy at least the idea of it, and is in that way, complicated with her husband’s actions.

Ben Affleck is a brilliant filmmaker and a better actor than he is often given credit for, and I certainly don’t blame him for this movie’s shortcomings. The script was clearly a mess and I do think the actor tried to something interesting with his character, which ultimately got lost in the production. Affleck’s performance starts off reminiscent of his excellent work in ‘Gone Girl,’ but once it is revealed he is guilty, you no longer want to see him succeed.

The movie also asks you to put a lot of common sense aside. I’m not sure that people would really react the way they do in this movie in real life if several people in their town went missing and all signs pointed to Vic. Honestly, the pool scene is ridiculous and the fact that Vic wasn’t caught red-handed right then and there is hard to believe. Maybe that is what Lyne was going for, a sort of “will he or won’t he” get caught, but if that’s the case, it wasn’t executed well.

The supporting cast try their best, but at times actors like Lil Rel Howery and Dash Mihok don’t even seem to know what movie they are in. And poor Tracy Letts! The Pulitzer Prize winning playwright and acclaimed actor tried his best to inject some reality into his performance, but eventually gives into the nonsense of the film’s plot and dialogue.

Adrian Lyne on the set of Hulu's 'Deep Water.'

I give credit to Adrian Lyne for trying his hand at the genre he practically invented in the 1980s, but with an incoherent script and ridiculous plot, there was not much the filmmaker could do. In the end, Affleck and de Armas both try to make the most of the material, but it’s not enough for the film to be entertaining beyond the level of this is "so bad it's  good.”