18 Things You Never Knew About 'RoboCop'

Has it really been 30 years since the release of "RoboCop"? I'll buy that for a dollar.

Released July 17, 1987, "RoboCop" had a huge impact, even bigger than that of an ED-209 police droid falling down a flight of stairs. It marked director Paul Verhoeven's Hollywood debut, gave Peter Weller his signature role, and launched a franchise that included two sequels, a 2014 remake, two live-action series, two animated TV series, and numerous spinoffs in other media.

Still, as often as you've watched Weller's cyborg struggle to regain his humanity while stoically blowing away evildoers, there's much you may not know about how "RoboCop" was made. 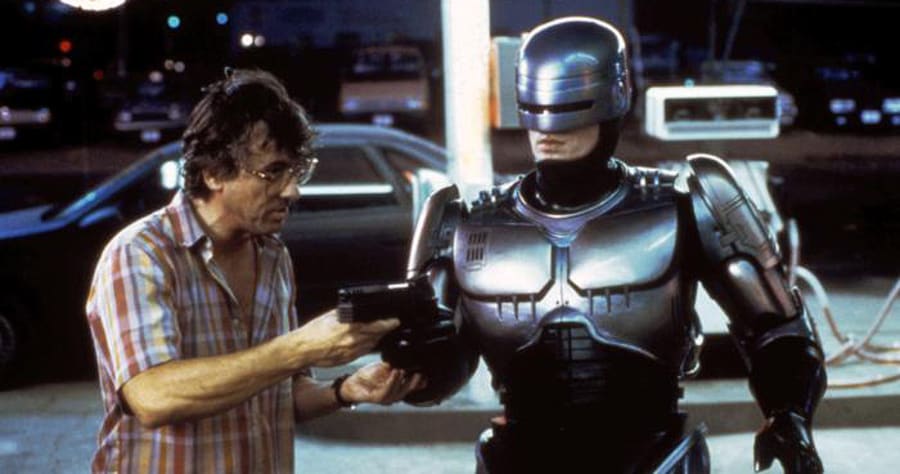 2. Such directors as V") turned down the screenplay before it made its way to Verhoeven. The Dutch director (above, left) threw the script in the trash, but his wife fished it out and convinced him there was a movie of substance to be made from it.

3. Verhoeven's first choice to star was his usual leading man, Rutger Hauer, followed by his eventual "Total Recall" star, Arnold Schwarzenegger. But both men were too stocky to maneuver easily inside the RoboCop costume. Verhoeven eventually chose "Buckaroo Banzai" star Peter Weller because the actor was thin, and because the director was convinced Weller could convey emotion effectively with just his exposed jaw.

4. For Murphy's partner, Officer Anne Lewis, Verhoeven initially wanted TV sleuth Stephanie Zimbalist, but she couldn't get time off from her popular NBC series "Remington Steele," so the role went to Nancy Allen (above).

5. Verhoeven cast Ronny Cox as Dick Jones because the "Beverly Hills Cop" actor had been typecast in paternal good-guy roles, which made Jones' reveal as the film's true villain all the more surprising.

7. Despite the Detroit setting, most of the film was shot in downtown Dallas, where the buildings appeared just futuristic enough to fit the story. The combination of the Texas heat and the stifling costume caused Weller to lose three pounds a day from sweating.

8. The RoboCop suit was the film's most expensive effect, eating $1 million of its budget. It was designed by make-up titan Rob Bottin ("The Thing"). There were actually six suits, some in various states of damage resulting from RoboCop's battles with criminals.

9. The suit was so bulky that it took 11 hours for Weller to put it on the first time, and the production had to stop for three days while he learned to walk in it. It was too big to fit in the Ford Taurus police cars, so whenever you see RoboCop in a car, you see only Weller's metal-clad head and torso; below the waist, the actor was just wearing boxer shorts.

10. Even the suit's hands, lined with rubber for flexibility, were clumsy; it took 50 takes to film the shot where RoboCop catches a set of car keys.

11. Many of the action scenes were filmed by cult-fave "Two-Lane Blacktop" director Monte Hellman, serving as the movie's second unit director.

12. Footage showing RoboCop's infrared vision was accomplished via decidedly low-tech means: the sequence was shot in the dark, with the actors wearing fluorescent body paint.

13. There was one full-scale ED-209 robot built, standing seven feet tall and weighing 300 pounds. But most of the footage of the cumbersome droid was made using miniatures and stop-motion animation. Its speaking voice was that of "RoboCop" executive producer Jon Davison.

14. The effects during the sequence when Emil (Paul McCrane) emerges from a vat of toxic waste and quickly disintegrates were inspired by monster-makeup legend Rick Baker's work on 1977's "The Incredible Melting Man," on which Bottin had done an uncredited assist. McCrane's face and hands were covered with saggy latex prosthetics. Later, Boddicker's car hits Emil and he turns into mush; that effect was accomplished via use of a hollow dummy filled with leftovers from the catering truck.

15. Verhoeven's initial cut of the movie received an "X rating" from the ratings board, not for pornography, just for extreme violence. (The NC-17 rating hadn't been created yet.) Verhoeven trimmed some of the more graphic shots and added the satirical TV commercials to lighten the movie's grim tone, but he still had to resubmit and recut the movie 11 more times before the board relented and granted the film an R.

17. At the 1988 Academy Awards, "RoboCop" won the Oscar for Best Sound Editing. It was also nominated for Best Editing and Best Sound Mixing.

18. During the end credits, the obligatory anti-piracy warning reads that "unauthorized duplication, distribution or exhibition may result in civil liability and criminal prosecution by enforcement droids."

In a violent, near-apocalyptic Detroit, evil corporation Omni Consumer Products wins a contract from the city government to privatize the police force. To test their crime-eradicating cyborgs, the company... Read More

'Starship Troopers' Is Getting a Reboot and People Are Not Happy