Can they sort out their differences and survive? 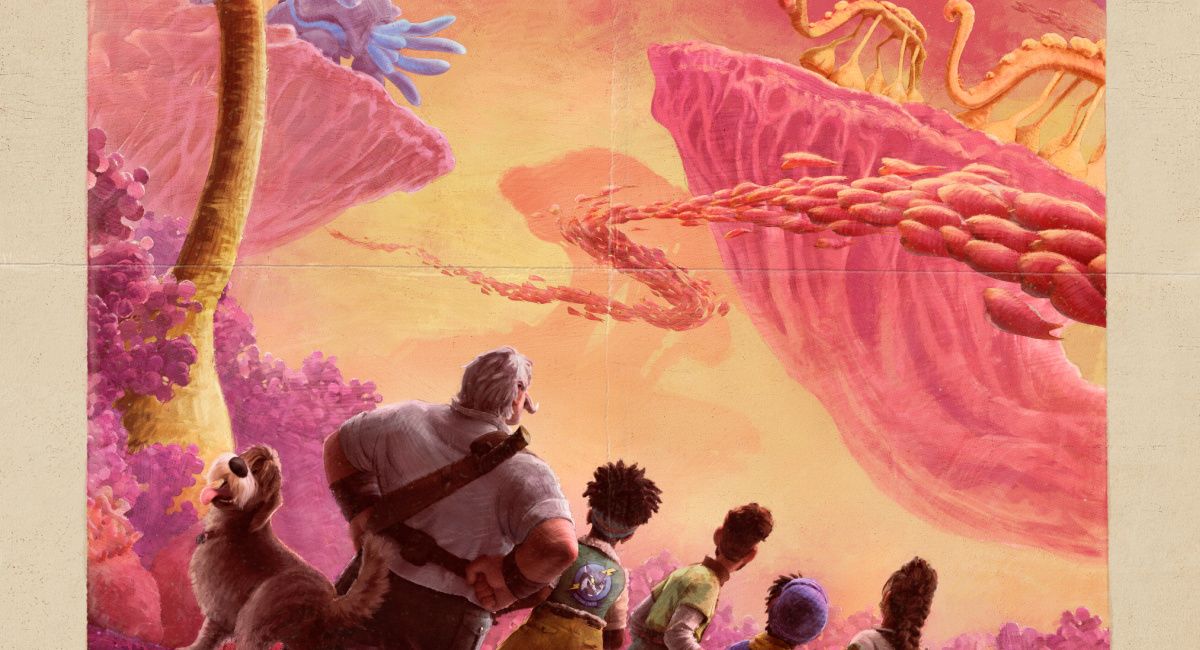 Not, as the title might make some suspect, a quickly pumped-out follow-up to Disney and Marvel’s successful ‘Doctor Strange in the Multiverse of Madness’, ‘Strange World’ is in fact the latest offering from Disney Feature Animation, looking to keep its own hit train going after ‘Encanto’ brought plenty of eyes to its screens and earworms to parents everywhere.

We don’t yet know if ‘Strange World’ will feature a song as catchy as ‘We Don’t Talk About Bruno’, or indeed any songs at all, but the focus here appears to be on retro promos, as the teaser is styled like a 1930s/40s/50s movie trailer.

Directed by Don Hall, who made ‘Big Hero 6,’ and most recently co-directed ‘Raya and the Last Dragon’, ‘Strange World’ also features the co-writing/co-directing talents of his ‘Raya’ colleague Qui Nguyen.

Jake Gyllenhaal voices Searcher Clade, the son of a steadfast explorer. The black sheep of his family, Searcher chose a very different path from the others. Coming from a long lineage of brave and daring explorers, Searcher instead decided to get his hands dirty differently: by becoming a farmer.

But here, Searcher needs to team up with his family to help them complete an incredibly dangerous mission. As he steps out of his comfort zone, Searcher is amazed and intrigued by the unknown alien world that surrounds him.

The action-adventure journeys deep into an uncharted and treacherous land where fantastical creatures await them all, as their differences threaten to topple their latest—and by far—most crucial quest.

And the throwback style of the teaser is perhaps not surprising given Hall’s enthusiasm for adventures such as this: “I loved reading the old issues of pulps growing up,” he said in a statement when the first images for the movie came out. "They were big adventures in which a group of explorers might discover a hidden world or ancient creatures. They’ve been a huge inspiration for ‘Strange World’."

“Strange” is certainly the word to describe where the Clades find themselves. Though there’s little information about how they get here, or indeed where exactly they are, this could be them journeying deep into the Earth, where odd beasties lurk. Giant cliffs that turn into walking creatures? Plenty of tentacled things. It’s all very Jules Verne with just a hint of family-friendly Lovecraft…

For Gyllenhaal’s part, he was excited to get into a voice booth for the first time, though he discovered that having to record his part from home during the pandemic was… less fun.

“I think all you really have, as an actor, outside of technical skills, is your imagination, so that was one thing. I did find it interesting,” Gyllenhaal told The Scotsman. “We had a camera that had to shoot us doing the action so the animators could mimic our facial expressions, so I had a difficult time holding that screen up and talking to it at the same time and it was so, so hot. I played the entire role on my knees, in basically a prayer position by a bed, with two pillows over both sides of my head and a very heavy blanket over them.”

Disney has yet to announce who else is in that voice cast, though we do know that their good luck charm, Alan Tudyk (who has had a role in everything since ‘Wreck-It Ralph’), is also present and correct.

"Journey to a place where nothing is as it appears!"
Not Yet RatedNov 23rd, 2022

A journey deep into an uncharted and treacherous land, where fantastical creatures await the legendary Clades—a family of explorers whose differences threaten... Read the Plot

From 'Rogue One' to 'Powerless,' Alan Tudyk Has Mastered His Comedic Voice

'Rogue One: A Star Wars Story': 8 Things We Know About the Characters