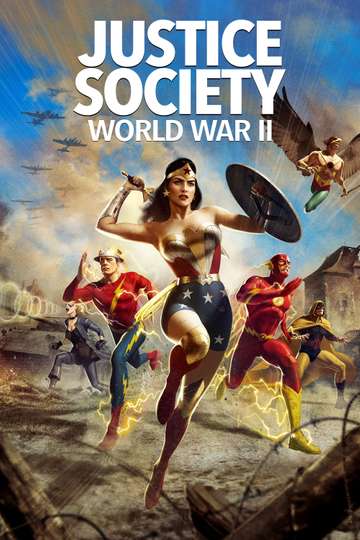 Fancy watching 'Justice Society: World War II' in the comfort of your own home? Discovering a streaming service to buy, rent, download, or watch the Jeff Wamester-directed movie via subscription can be a challenge, so we here at Moviefone want to do the work for you.

Below, you'll find a number of top-tier streaming and cable services - including rental, purchase, and subscription choices - along with the availability of 'Justice Society: World War II' on each platform when they are available. Now, before we get into the various whats and wheres of how you can watch 'Justice Society: World War II' right now, here are some finer points about the DC Comics, Warner Bros. Animation, DC Entertainment, Warner Bros. Home Entertainment Group war flick.

Released April 27th, 2021, 'Justice Society: World War II' stars Stana Katic, Matt Bomer, Chris Diamantopoulos, Darren Criss The PG-13 movie has a runtime of about 1 hr 24 min, and received a user score of 76 (out of 100) on TMDb, which put together reviews from 401 respected users.

Want to know what the movie's about? Here's the plot: "When the Flash finds himself dropped into the middle of World War II, he joins forces with Wonder Woman and her top-secret team known as the Justice Society of America."

Batman: Death in the Family
"The fate of Gotham is in your hands."
Underworld: Endless War
Superman: Man of Tomorrow
"Before he was the Man of Steel, he was the Man of Tomorrow."
Red Scorpion
"They think they control him. Think again."
Parasyte: Part 2
Batman: Hush
"Trust, betrayal...and death."
Batman: The Long Halloween, Part One
"Naughty or nice. Trick or treat. Hero or villain."
The Viking War
Justice League: War
"A time when heroes became legends."
Justice League Dark: Apokolips War
"The war to end all wars."
War
Iron Man & Captain America: Heroes United
"Iron Man and Captain America team up in groundbreaking Marvel CG Animation."
Bennett's War
"Coming home was only the beginning"
War of the Worlds: Annihilation
Vixen: The Movie
"An exciting new super hero with powers from the animal kingdom."

Batman: Soul of the Dragon
"Get ready for the ultimate showdown."
Batman: The Long Halloween, Part Two
"The clock is ticking. The days are numbered. The end has just begun."

Mortal Kombat
"Get over here."
Freedom Fighters: The Ray
"The Ray lights the way against evil"
Justice League vs. the Fatal Five
"When the future collides with the past, there's no time to waste."

USA's 'The Sinner' Renewed for Season 3, Matt Bomer to Star