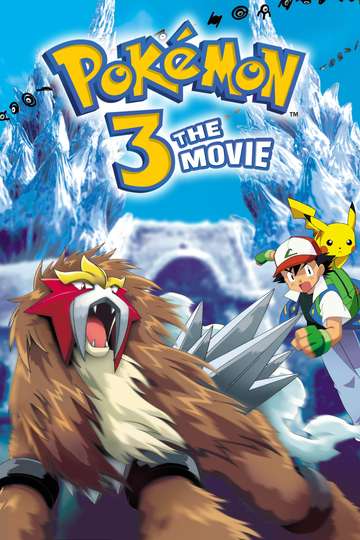 Pokémon 3: The Movie - Spell of the Unown (2001)Stream and Watch Online

Need to watch 'Pokémon 3: The Movie - Spell of the Unown' on your TV or mobile device at home? Discovering a streaming service to buy, rent, download, or watch the Kunihiko Yuyama-directed movie via subscription can be confusing, so we here at Moviefone want to do right by you.

We've listed a number of streaming and cable services - including rental, purchase, and subscription options - along with the availability of 'Pokémon 3: The Movie - Spell of the Unown' on each platform. Now, before we get into the fundamentals of how you can watch 'Pokémon 3: The Movie - Spell of the Unown' right now, here are some details about the Kids' WB, Nintendo, OLM, Pikachu Project 2001, Pikachu Project, Shoakuken, TV Tokyo, 4Kids Entertainment fantasy flick.

Released April 6th, 2001, 'Pokémon 3: The Movie - Spell of the Unown' stars Rica Matsumoto, Ikue Otani, Yuji Ueda, Mayumi Iizuka The G movie has a runtime of about 1 hr 33 min, and received a user score of 64 (out of 100) on TMDb, which collated reviews from 470 experienced users.

Interested in knowing what the movie's about? Here's the plot: "When Me Snowdon's sadness of her father's disappearance get to her, she unknowingly uses the Unknown to create her own dream world along with Entei, who she believes to be her father. When Entei kidnaps Satoshi's mother, Satoshi along with Kasumi & Takeshi invade the mansion looking for his mom and trying to stop the mysteries of Me's Dream World and Entei!"

Movies Like Pokémon 3: The Movie - Spell of the Unown

Pokémon the Movie: Black - Victini and Reshiram
The Kingdom of the People of the Earth once ruled over the land, but n...

Pokémon: The Rise of Darkrai
Ash and friends (this time accompanied by newcomer Dawn) arrive at an...

Pokémon: Lucario and the Mystery of Mew
In the legendary past, before Poké Balls were invented, an aura-guidin...

Pokémon: The First Movie - Mewtwo Strikes Back
The adventure explodes into action with the debut of Mewtwo, a bio-eng...

Pokémon: The Movie 2000
Satoshi must put his skill to the test when he attempts to save the wo...

Pokémon: Giratina and the Sky Warrior
When Giratina is discovered to be able to create parallel dimensions,...