Every Halloween Movie, Ranked From Terrible to Terrifying

Halloween is a franchise that people connect with, but some movies are clearly better than others. So that's why we're running down the franchise, from the horrible to the horrifying. 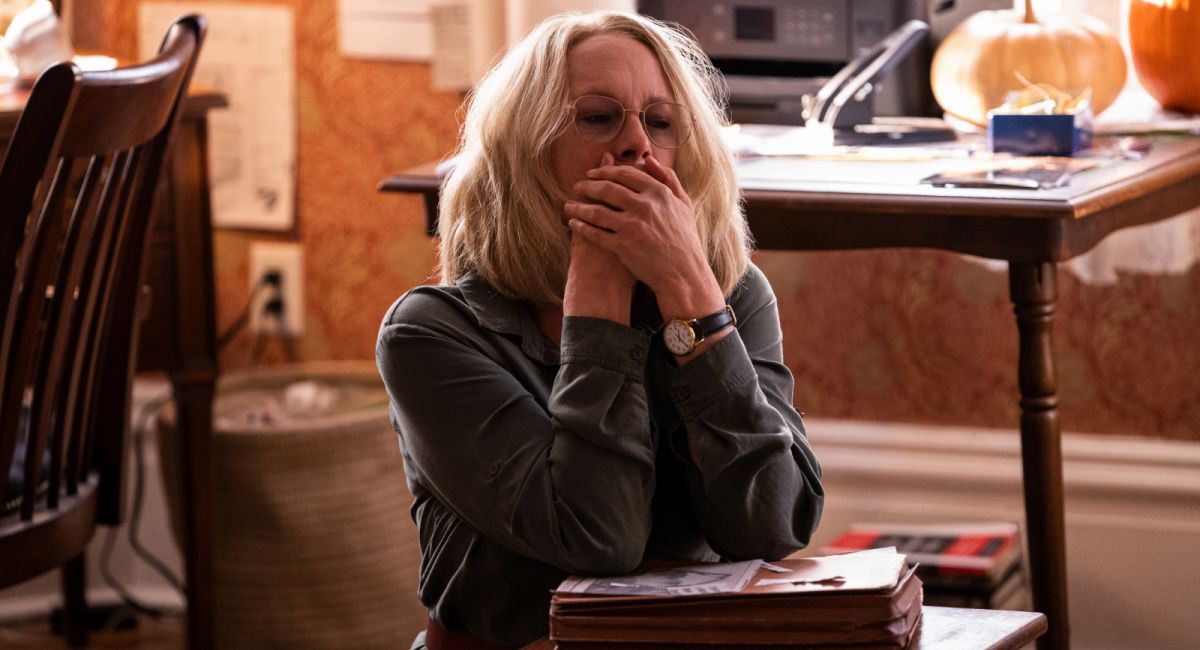 The latest movie in the 'Halloween' franchise, 'Halloween Kills' starring Jamie Lee Curtis is out now in theaters.

The series, which started in 1978 with director John Carpenter's 'Halloween,' has spawned a dozen of movies that range from sequels to remakes, and even reboots.

With the Halloween holiday taking place this week, and with 'Halloween Kills' currently in theaters, Moviefone has ranked every 'Halloween' movie ever made!

When Busta Rhymes being a principle cast member is one of the least horrible things about your movie, well, you know you're in deep doo-doo. After the success of "Halloween H20," Dimension moved forward on a direct follow-up that undoes much of the charm of the previous film. It turns out that Laurie Strode accidentally killed a paramedic at the end of "H20" instead of Michael Myers! Whoops!

The mentally unstable Strode is now institutionalized and Michael attacks her in the asylum, eventually killing her and throwing her off the roof of the building. Please keep in mind that all of this happens in the first ten minutes of "Resurrection" and the rest of it is a dumb-as-heck riff on reality television where a group of goofballs are holed up in the old Myers house (now festooned with close circuit TV cameras). All of the action is clumsily choreographed by Rick Rosenthal, who you might remember as the guy that they fired from "Halloween II." Yuck.

Following 'Halloween Kills,' the story moves on four years, as Haddonfield has enjoyed a time of relative calm after the disappearance of Michael Myers. Though the vibrating hum of tension is always present as an undercurrent, Laurie has done her best to move on with life. She’s living without a complicated security system, writing about her experiences and the nature of evil and trying to guide granddaughter Allyson (Andi Matichak), who is still suffering the psychological scars of her parents’ loss and trying to move on by working as a nurse at the local hospital.

But even as everyone looks to cope and heal, the town is set back on edge when Corey Cunningham (Rohan Campbell) accidentally kills the boy he’s babysitting. Though it’s a tragic mistake, the repercussions are devastating, turning Corey into an unwitting bogeyman and the target of bullies. Jamie Lee Curtis is thankfully handed more to do as Laurie this time, and of course she’s still fantastic as the haunted heroine we’ve come to know and worry about. Switching up her attitude once more works for the character, as she tries to put the past behind her and concentrate instead on a future for her and her family.

If the latter canonical "Halloween" sequels (pre-"H20") leaned a little too heavily into the mystical side of Michael Myers, then Rob Zombie's highly touted reboot goes too far in the opposite direction, as he strived to provide a psychologically grounded explanation for Myers' madness. And the results were … iffy.

Failing to understand just how much of the character's power lies in his unknowable mystique, Zombie's "Halloween" focuses mostly on Michael Myers' childhood, as he tortures animals, faces bullies at school, and is abused at home. And then, suddenly, in the last act, it shifts into a straight-up remake of the original film. It feels both incredibly risky and very safe and, in the end, quite boring, sadly.

The previous installment in the franchise clearly ended on a cliffhanger and an obvious attempt at building out the world, but the sixth film, "Halloween: The Curse of Michael Myers," wouldn't happen for another six years. This installment doubles down on the mystical woo-woo that the previous films introduced, folding in elements of 1981's "Halloween II" (there's an extended hospital sequence) and a subplot about a mystical cult and the pagan "Curse of Thorn."

Perhaps notable for its introduction of a young, squirrely Paul Rudd (who plays Tommy Doyle, one of the kids Laurie babysat for in the original film), for years a superior "producer's cut" was talked about and shared at horror conventions. Spoiler alert: it's pretty different but it's not that much better. (It's still awash in unnecessary backstory that would ultimately sink Rob Zombie's remakes.)

You could tell that the franchise was hopelessly out-of-date, and that was before considering that it opened the same weekend as David Fincher's groundbreaking "Seven." Barry kicks ass, though.

Halloween: The Curse of Michael Myers

"Halloween 5" doubles down on a lot of things established in "Halloween 4" (the centralized role of Michael's niece Jamie Lloyd, here traumatized from the events of the previous movie, the idea of multiple people dressed as Myers, Loomis' unhinged pursuit) while adding even more to an increasingly cumbersome mythological stew (Jamie and Michael's connection is more openly supernatural, a shadowy cult is introduced).

If these elements had been woven into the already established framework more elegantly, or if they were in service of a storyline that needed such embroidery, it would be one thing, but "Halloween 5" is pretty dopey (and we haven't even mentioned the keystone cops-type music that plays when local law enforcement shows up). Smash this pumpkin.

Halloween 5: The Revenge of Michael Myers

This was supposed to be the new template for the franchise – that every year a new entry would focus on a different aspect of Halloween. Michael Myers would be retired and we'd get a big, splashy, cinematic equivalent to "The Twilight Zone." Except that didn't happen. Instead, "Halloween III: Season of the Witch" was indifferently received and, well, you know the rest.

It's an inventive, gonzo, occasionally quite shocking little occult thriller with an ingenious script by British legend Nigel Kneale and director Tommy Lee Wallace (a Carpenter confederate who had served as art director and production designer for the first film) and one of the best scores of the series (by Carpenter and Alan Howarth).

Halloween III: Season of the Witch

After Laurie, Karen and Allyson leave the masked monster Michael Myers caged and burning in Laurie's basement, Laurie is rushed to the hospital with fatal injuries, believing she has finally killed her algorithm. But when Michael manages to free himself from Laurie's trap, his bloodbath ritual begins again. As she fights her pain and prepares to defend against it, she inspires everyone in Haddonfield to rise up against The Shape.

Zombie said that he felt liberated by the fact that he wasn't beholden to the "Carpenter-ness" of remaking the first film. And you can tell. Gone are any pretext of the floating, widescreen, Steadicam-assisted beauty of Carpenter's film (or Zombie's remake); instead, it's replaced with shaky, handheld 16mm. Gone, too, is much of what made Zombie's first film such a drag.

Michael isn't intellectualized, but rather given a simple, effective mommy complex that's accompanied by suitably dreamlike imagery. Of course, the filmmaker isn't above cribbing from "Halloween II," including the hospital setting and familial twist. But that seems like a secondary concern to Zombie, who makes this film his own in ways that he felt too intimidated by the first time around. It's not for everybody, but that's part of its charm.

Conceptually, "Halloween H20" is a lot more fun than it actually wound up being. Discounting the events of the fourth, fifth, and sixth films, it would serve as a direct sequel to the second film, with Laurie Strode (Jamie Lee Curtis, back for more) living in hiding and teaching at a prestigious boarding school. (Okay.) Clearly intended to cash in on the revived slasher craze (started by "Scream," which directly referenced "Halloween" and whose screenwriter, Kevin Williamson, was involved heavily with "H20"), the film is largely unimaginative and a waste of Curtis' considerable talents.

Slack direction from Steve Miner gives a talented young cast (including Michelle Williams and Joseph Gordon-Levitt) very little to do. Also, the filmmakers had an infamously hard time getting the iconic mask right, resulting in several variations that were swapped out during production, including the utilization of an unsightly CGI version.

After producers rejected a pitch from Carpenter that would have followed two of the young kids from the first movie (now babysitter-aged themselves), with a bloody climax at a drive-in movie theater, they settled on something more conventional. "Halloween 4" sees Michael Myers return for the first time since the second film; this time, he's hunting Jamie Lloyd (Danielle Harris), Laurie Strode's young daughter.

There are some nice flourishes to the film, including Jamie's decision to wear a clown costume eerily similar to the one when Michael killed his older sister all those Halloweens ago, but these are largely undermined by WTF-worthy character motivation and Dwight H. Little's basic-cable action movie direction (that man is not much of a stylist). Still, pretty good twist ending.

Halloween 4: The Return of Michael Myers

In a weird way, "Halloween II" is just as influential as the original. Its hospital setting has not only inspired other entries in the franchise (the sixth installment and Zombie's "Halloween II" owe a debt) but it's also inspired the genre as a whole, with the sequel-set-in-a-hospital idea utilized by everything from "Scream Queens" (on TV) to the underrated horror comedy "Final Girls." Other than that, there's not much to love about the half-baked sequel.

Sure, original screenwriters Carpenter and Debra Hill returned but were mostly out of ideas. In fact, the idea of Laurie Strode (a returning Jamie Lee Curtis) being Michael's sister was thrown in at the last minute and not something planned by either filmmaker. (Oddly, it basically formed the basis for the rest of the franchise, including the remakes; the 2018 film wisely omits this plot point.) At some point during production, original director Rick Rosenthal was removed, leaving Carpenter to shoot key sequences. Scary.

40 years after Laurie Strode first faced down Michael Myers, Jamie Lee Curtis returns to the franchise for a "Halloween" that feels fresh, funny, irreverent, surprising, and totally topical. Her Strode has calcified into a wary survivalist, waiting for the day that her psychotic stalker returned. In this film, he does, and the results are spectacular.

Largely ignoring the increasingly convoluted mythology of the sequels (including "Halloween II," so say bye-bye the Laurie-is-Michael's-sister nonsense), co-writer/director David Gordon Green instead crafted a keenly aware and deeply entertaining back-to-basics follow-up that thoughtfully grapples with the way that violence and trauma can ripple through whole generations. This is the rare sequel that can stand proudly alongside the original, four decades later.

It cannot be overstated what a monumental event the release of John Carpenter's "Halloween" really was. Originally envisioned as a low budget cheapie, this classic is elevated by Carpenter's commitment to craft and his dedication to getting fully realized performances out of his mostly young cast (led by Jamie Lee Curtis). For a while, "Halloween" was the most successful independent feature of all time. It not only inspired a 40-year-old franchise but also countless imitators (some of them good, most of them bad), reinvigorating the slasher franchise for generations to come.

Wonderfully entertaining and craftily made, "Halloween" remains as thrilling and artful today as it was in 1978. Much of this has to do with its simplicity. In following a group of teenagers as they are terrorized by a local murderer (who killed his older sister on Halloween night when he was just a child), Carpenter made a template simple enough to follow but roomy enough to allow for social, political, and cultural subtext.

If "Halloween" was anything less than a masterpiece, we wouldn't still be talking about it today.