James Gunn’s ‘The Suicide Squad’ is grisly, funny, and one of his best movies

Gunn and his cast, including Idris Elba, Margot Robbie, and John Cena, put their own stamp on the DCEU, and it’s going to be a hard act to follow. 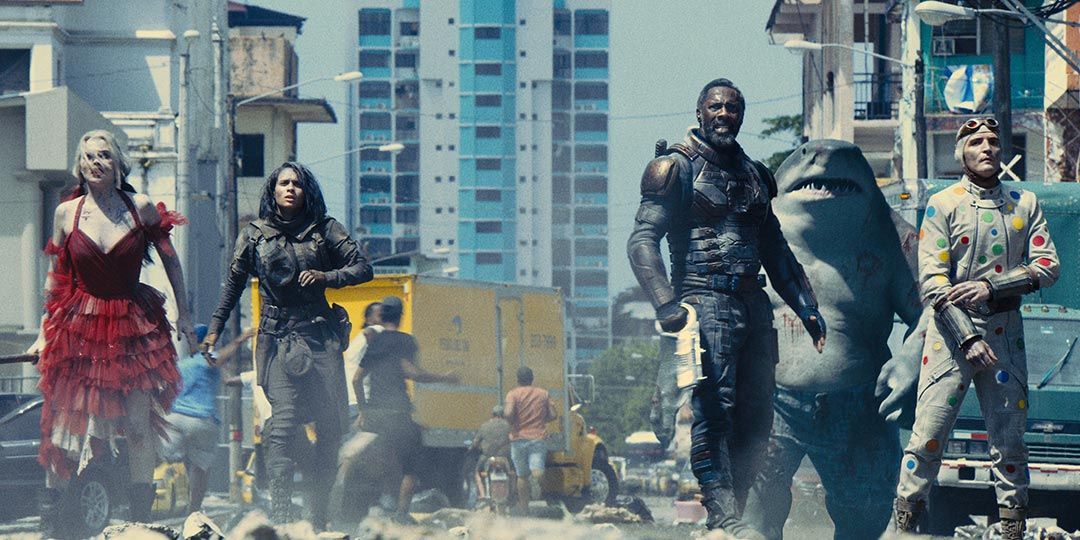 ‘The Suicide Squad’ begins with our introduction to Savant (Michael Rooker), a criminal behind bars, with a talent for geometry and a mean streak when it comes to birds. He’s given the set-up for the story; he’s going to go on a black ops-type mission with a team of fellow convicts, and in return, ten years will get knocked off his prison sentence. This is explained to him by one Amanda Waller (Viola Davis), who also informs him that if he tries to escape, or ditch the operation, or double-cross her in any way, she’ll detonate the tiny bomb in his head.

So if you never saw the 2016 ‘Suicide Squad,’ you’re pretty much caught up at this point – Waller uses incarcerated super villains for spy missions, and she’s not really concerned if they make it back alive. If you did see the previous film, you’ll recognize some returning faces, like military liaison Rick Flag (Joel Kinnaman), Captain Boomerang (Jai Courtney), and the inimitable Harley Quinn (Margot Robbie), who says she’s back in the joint for “road rage… in a bank.” Savant and the rest of Task Force X are off to the (fictional) South American island nation of Corto Maltese to destroy a science lab called Jötunheim.

James Gunn wrote and directed this latest entry in the DCEU, and he brings his own impressive stamp to the movie. I think it’s fair to say that Gunn’s ‘The Suicide Squad’ is closer to his films ‘Slither’ and ‘Super’ than it is to either of his Guardians of the Galaxy outings. Given the R-rating in play, it probably won’t be surprising to learn that this is a particularly grisly comic-book movie with more than a few risqué (if now downright dirty) jokes. But it is surprising how much emotion Gunn brings into this story.

Being that this takes place in a comic-book world, the characters personalities are as extreme as their powers. Idris Elba’s Bloodshot is a violent mercenary who thinks the best parenting advice he can give his recently-arrested daughter is to make sure she has a lookout the next time she steals something. John Cena’s Peacemaker is a jingoistic meathead who will happily kill (among other things) to make peace. Margot Robbie’s Harley Quinn is… well, you’d have to have been living in a cave for the past few years not to know who she is. And King Shark (voiced by Sylvester Stallone) is simply the bestest boy.

As expected, some of these characters don’t get along, and the rivalry between Bloodshot and Peacemaker is particularly well served by Elba’s tired sighs and Cena’s gung-ho cluelessness. But some of the other characters ground the movie with unexpected empathy. Daniela Melchior’s Ratcatcher at first seems like she’s in over her head, but she’s the first to show she’s willing to reach out to others in the group, and Melchior makes us believe it. And David Dastmalchian’s Polka-Dot Man is… I’ll put it this way; Polka-Dot Man is a terrible comic book character. He’s down there with Crazy Quilt, Clock King, and Condiment King in the DC Villains Hall of Lame. But between Gunn’s script and Dastmalchian’s pathos, Polka-Dot Man becomes a tragic figure (albeit a crazy one). At the same time, Gunn and Margot Robbie show us the continuing evolution of Harley Quinn, showing us that she’s learned from (some of) her mistakes, but she’s willing to make entirely new ones, too.

Team movies can be tough, especially when team members have superpowers. But the movie doesn’t get bogged down in origin stories; at most, Davis’ Waller might give a rote description of someone’s role on the team, but not much more than that. She gives us the sense we’ll learn about what someone can do when we need to, and in that, she’s doing what Gunn does as a director. And it works. That lets him deftly balance the various character arcs, and make sure that they’re all relevant to the main story at hand. And you’d never think this movie is 132 minutes long; Gunn capitalizes on the abundance of characters to keep the story moving around, but never so much that we lose track of the overall plot. Henry Braham’s cinematography helps give us a sense of place, both in his long shots of pitched battles and giant monsters, or the mobile camera work in a nightclub and on rooftops.

Ultimately, this is a great example of a director being given the freedom to bring their own style to a big-budget production. The cast is clearly having a good time making this movie, and that energy is infectious. I, for one, would watch another mission from this crew if Gunn is in charge again.

'The Suicide Squad' is now in theaters and on HBO Max.