While Leto is very good as Marvel’s Living-Vampire, it’s not enough to make the movie truly entertaining or keep it from falling into genre tropes. 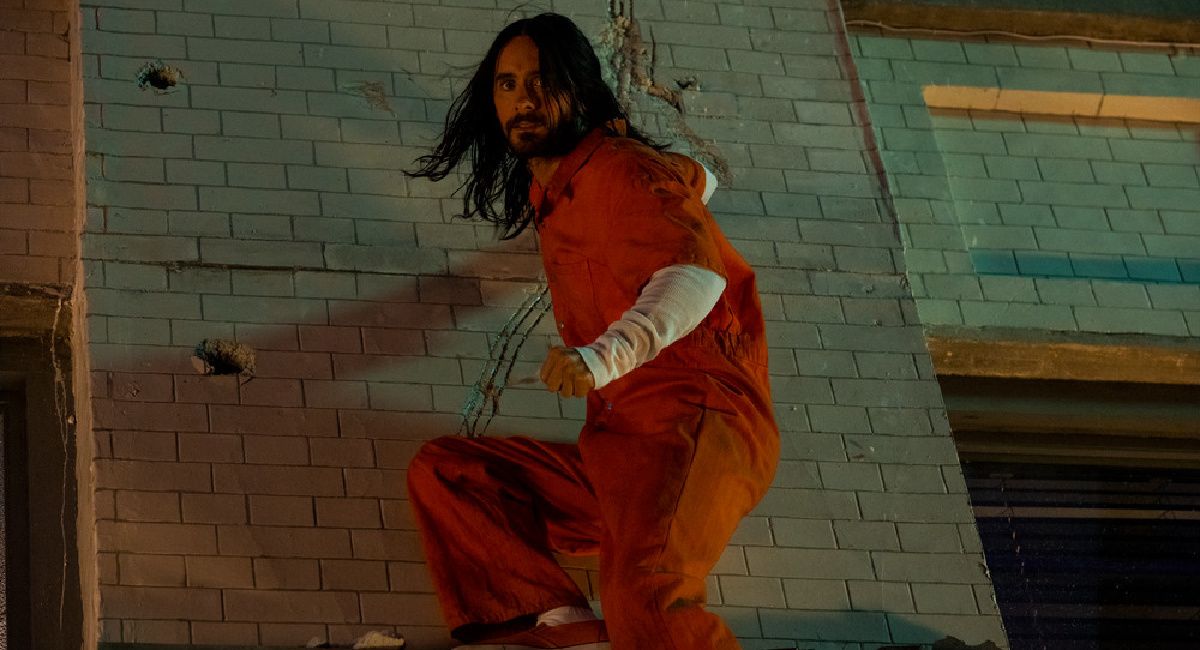 Opening in theaters on April 1st is the new superhero movie ‘Morbius,’ which is based on the classic vampire character from Marvel Comics. It’s the third film in Sony’s Spider-Man Universe following ‘Venom,’ and ‘Venom: Let There Be Carnage.’

Directed by Daniel Espinosa (‘Safe House’), the movie stars Jared Leto (‘House of Gucci’) as Dr. Michael Morbius, who suffers from a rare blood disease and experiments with a dangerous cure that afflicts him with a form of vampirism.

The result is a somewhat incoherent film that has no real purpose (other than to set up possible sequels) and feels like it was made in the 1990s. However, as a fan of Marvel, I did find some of the characters and stylized action sequences interesting, but ultimately, it was not enough to make me recommend this movie.

The film begins by introducing us to Dr. Michael Morbius (Leto), who suffers from a rare blood disease and is desperately seeking a cure, which he thinks he has found from studying bats. On the verge of finding a cure oversees, we flashback to Michael’s childhood growing up in a group home where he was raised by Nicholas Morbius (Harris), along with his surrogate brother Milo (Smith), who also suffers from a similar disease. Michael dedicates himself to his studies and vows to one day find a cure and save both himself and Milo.

We then cut back to present day where Morbius and his fiancée Dr. Martine Bancroft (Arjona) decide to experiment with what Michael thinks could be the cure. Michael takes it, but then begins to transform into a vampire. He is not vulnerable to light but does need blood to survive.

After several mysterious deaths where the victims have been drained of their blood, FBI agent Simon Stroud (Gibson) begins to suspect Morbius. Afraid of what he’s becoming, Michael refuses to share the “cure” with Milo, which the latter is not happy about. But, is Michael the real killer? Or is it someone else? Now, Morbius must discover the truth for himself, while protecting Martine and finding a way to stop himself from becoming a monster.

With nods in the film to several different Spider-Man movies from the past, fans weren’t sure what “universe” this movie was going to take place in. Without spoiling anything, I think I can safely say that ‘Morbius’ takes place in the ‘Venom’ universe, which actually makes a lot of sense. The film is aesthetically very similar to ‘Venom,’ and certainly shares the same DNA in addition to the same universe.

Like ‘Venom’ and its sequel, ‘Morbius’ seems like an older movie, something we would have seen in the late 90’s or when Sam Raimi was making his ‘Spider-Man’ movies. It’s rough, crude at times, and doesn’t fit into the slick and fun Marvel movies we expect in 2022, especially after the brilliant ‘Spider-Man: No Way Home.’

Although, there is a connection to the MCU in ‘Morbius,’ that is revealed by a not so secret cameo in the movie’s two end credit scenes. Without giving too much away, I will just say that the scene allows an MCU character to now exist in Sony’s Spider-Man Universe. While the explanation doesn’t make a whole lot of sense, even in a world of multiverses, I do appreciate the addition of this legendary actor and his strong character and look forward to whatever new Sinister Six iteration they are clearly planning.

Digging into the problems with the screenplay written by Matt Sazama and Burk Sharpless, the relationship between Michael and Milo, which is central to the film, needed to be explained better. Yes, they were surrogate brothers and best friends, but there seemed to be something else at the core of their relationship, whether intentional or not. Were they lovers? Is that why Milo seems so jealous of Michael and Martine’s relationship? There was definitely something there, but it never gets explored, which is disappointing. If that is the case, making that clearer would have brought higher stakes to all of Milo’s actions.

Also unclear is what happens to Adria Arjona’s character at the end. I don’t want to give anything away, but let’s just say “something” happens to Martine at the end of the movie that is never explained or visited again. I thought it was being left open for a twist in the final fight sequence, or possibly an end credit scene, but sadly it wasn’t and any questions you have about the character will have to wait for the inevitable sequel.

I also feel that the quick pacing and editing of the film was somewhat sloppy and led to the movie being incoherent. There were too many flashbacks that interrupted the main story and were ultimately only added for exposition and character set up.

But there are some elements of the film that I enjoyed. The superhero aspects of the story worked, even if Morbius was a villain and not a hero in the comics. Jared Leto gives a strong and dedicated performance as Michael Morbius, which is worth watching even if he plays him differently from the source material. Leto’s Morbius cares about human beings and refuses to take a life, which is in stark contrast to how the Spider-Man villain is normally depicted. Director Daniel Espinosa also chose some really cool effects to demonstrate Morbius’ vampire-like abilities.

In the end, Leto’s commanding performance, the character, and the superhero genre are not enough to save ‘Morbius’ from being a disappointing Marvel movie. With a weak script, bad dialogue, silly supporting characters, and lack of strong pacing and tone, ‘Morbius’ is a cinematic mess and the type of movie that only hardcore Marvel fans will understand and enjoy.

The 'Life' Writers Talk About the Movie's Shocking Twist

Jake Gyllenhaal Reteams With 'Life' Director for 'The Anarchists vs ISIS'