‘The Woman King’ Sees Viola Davis as a Historical Warrior

Davis commands the screen (in more ways than one) for Gina Prince Bythewood’s stirring epic of battle and bonding. 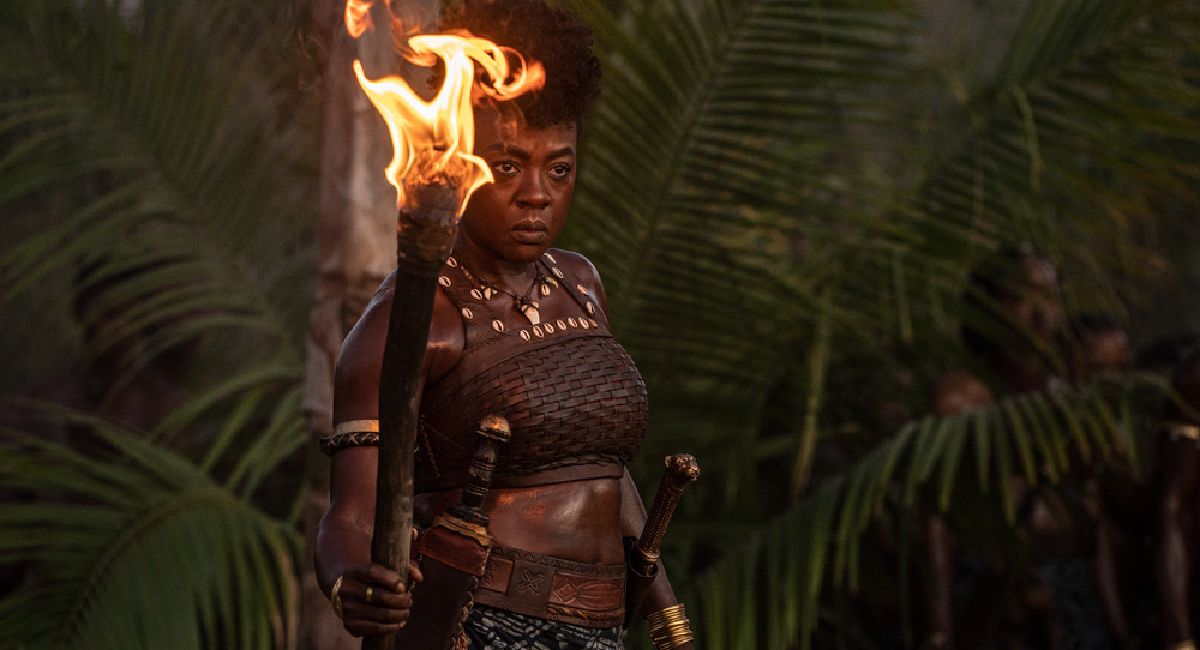 Releasing in theaters on September 16th, ‘The Woman King’ feels like a throwback to the sort of historical drama that is rarely made by studios these days.

And, indeed, one that has almost never been made by and about people who look like Viola Davis, Lashana Lynch, Thuso Mbedu, Sheila Atim and the vast majority of the cast for the film itself.

Gina Prince Bythewood, who last directed ‘The Old Guard' (a more fantastical tale of an immortal female warrior leading her similarly long-lived squad), here brings real power and emotion to the based-on-truth story of an African kingdom in the 19th century that could serve as the template for a more progressive and egalitarian society today.

Davis stars as Nanisca, the Miganon, or general of the Agojie, the fearsome, all-female unit of warriors who defended the Kingdom of Dahomey (an area of the African continent now known as Benin) and its ruler, the freshly installed King Ghezo (John Boyega).

(L to R) Viola Davis and John Boyega star in 'The Woman King.'

This is a time when the slave trade is at its height, European cultures running their economies on the back of trading humans. And Dahomey is not innocent in that – the kingdom has seen its own financial wellbeing dependent on selling the prisoners it captures in battle. Nanisca, though, the scars of her own imprisonment from years ago still clear in body and mind, is pushing for change, arguing that their society can benefit more from the trade in palm oil and other goods than human lives.

Mostly, though, she’s busy commanding Dahomey’s forces, protecting its citizens from the forces of neighboring tribes, who have forged their own ties with slavers.

Yet our way into this powerful fighting force – and the story itself – is via Mbedu’s Nawi, a forthright and headstrong young woman whose father has given up all hope of marrying off (particularly after she puts her latest, rude, wealthy suitor squarely in his place) and decides to hand her over to the king.

Nawi, fascinated by the Agojie, instead opts to become a recruit, looking to show she has what it takes to join this elite force. Which means she’s soon under the tutelage of Izogie (Lynch), a chief lieutenant whose stern sergeant major manner belies a witty, caring side.

(L to R) Viola Davis and Lashana Lynch with young recruits in 'The Woman King.'

Davis is, as befits her career to date and her Oscar-winning status, is magnetic and stern in her role, but, in combination with Bythewood and Dana Stevens’ script, finds real vulnerability in her role. There’s more to Nanisca than simply scowling and fighting, coming across as a rounded woman dealing with the challenges of her time period.

But right there with her are Lynch, Mbedu and Sheila Atim, the other key figures of the movie, whose characters are all well-rounded. Lynch, best known for ‘Captain Marvel’ and as the sly new 007 in ‘No Time To Die’ is excellent as Izogie, a woman with no time for weakness and a love for whiskey, but who also shows other sides of herself.

Carrying her fair share of the dramatic weight, Mbedu (a veteran of Barry Jenkins’ ‘The Underground Railroad’) also shines, making sure that her character never comes across as instantly perfect at everything she does – it’s a hard road from wide-eyed newcomer to battle-hardened warrior.

Then you have Atim, who got so little to do in films such as ‘Pinocchio’ and ‘Doctor Strange in the Multiverse of Madness’ really getting her teeth into the role of Amenza, Nanisca’s closest friend, aide and spiritual adviser, the person who can truly confront her when necessary. She’s far from the stock character of this sort in historical drama, making Amenza feel alive and human.

John Boyega has less to do as the King, but he’s entertaining in his scenes, proving to be commanding when the role requires and thoughtful at other times.

Bythewood infuses almost every scene with verve and energy, though she can’t quite make all the elements work. A half-baked, non-starter of a romantic connection between Mbedu and Jordan Bolger’s Malik, born to a Dahomey mother and a white father who grew up in Europe and returns in the company of his best friend Santo (Hero Fiennes Tiffin), who has inherited a slave operation and is learning how to run it. That subplot ultimately ties into the rest of the story but never feels as authentic as the rest, more a Hollywood concoction than something drawn from truth.

More effective (but still not up to quite the standard of the movie as a whole) is a surprise revelation for two of the characters that we won’t spoil. But suffice to say it’s soapier than it might have needed to be.

The movie really comes alive when Davis and co. are in battle, the clashes pushing the PG-13 rating to its limit (though still more bloodless than the violent stabbing, slashing and shooting might suggest), and the cast fully commit to the action, working alongside some extremely adept stunt performers to make sure that Nanisca, Izogie and the rest are exactly as brutal and efficient on the battlefield as you might expect.

Nanisca has some demons she needs to confront, literally in one case when she faces off against Jimmy Odukoya’s misogynistic and cruel Oba Ade, commander of the forces from the nearby Oyo Empire, who is her nemesis and one of the only people who can actually stand up to her in battle. Odukoya is a vital, dangerous force in the film, more than just a simple villain.

Vibrant and full of passion, ‘The Woman King’ might not have the same multimedia appeal of, say, ‘Black Panther’, but it deserves to do well, telling a story that many people won’t have heard and bringing a unique aspect to the genre.

The Woman King is the remarkable story of the Agojie, the all-female unit of warriors who protected the African Kingdom of Dahomey in the 1800s with skills and a... Read the Plot