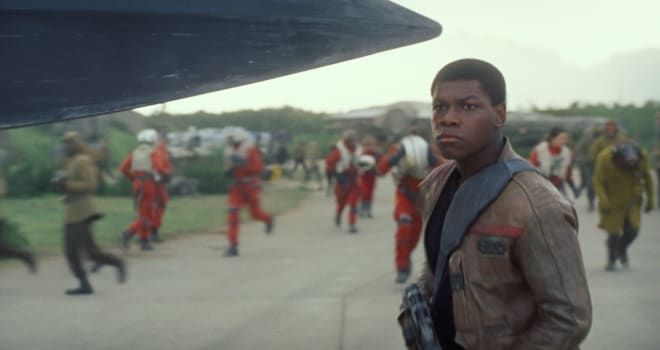 John Boyega was a force for good in the lives of some sick children last week, when the actor -- in character as his "Star Wars: The Force Awakens" alter ego, Finn -- surprised some tots with toys at a London hospital.

Boyega appeared at The Royal London Hospital last Friday on behalf of children's charity Rays of Sunshine. The organization had received a request from 5-year-old patient Daniel Bell, who was recently diagnosed with a brain tumor, for a visit from his favorite "Force Awakens" character. But Bell didn't just want a private audience with Finn -- he wanted the character to join him in passing out "Star Wars" toys to the rest of the kids at the hospital, too.

The actor obliged, and spent the day on Friday at Daniel's side, visiting with multiple children, handing out "Star Wars" gear, and dueling in lightsaber battles. According to Boyega's Instagram, he stayed completely in character throughout the day, marveling at unfamiliar technology such as cars and having Daniel "[teach] Finn about everything earth related."

This little stormtrooper Daniel had a wonderful wish after seeing the force awakens. Daniel currently lives with a brain tumour and rather than having Finn to himself he wanted Finn to meet the kids at the Royal London hospital and give them some toys. I stayed in character while I was with this brave boy asking him what a car was. He taught Finn about everything earth related! Really thankful for the opportunity this child granted me and I'm just humbled! I hope I played a little part in making you smile young stormtrooper. ❤️❤️❤️

"Really thankful for the opportunity this child granted me and I'm just humbled!" Boyega wrote on Instagram. "I hope I played a little part in making you smile young stormtrooper."

❤️ Layla: Finn where's Rey? Finn: I don't know, I got beat by kylo and I can't remember anything Layla: okay I'll be your Rey today. Okay? Finn: okay! Lead the way.

Daniel's mother, Rosalind Bell, wrote on Facebook that Boyega's visit was "amazing," and her son was "totally overwhelmed" by the experience.

"I have never seen him so happy," Rosalind said of Daniel. " ... Finn was just amazing wasn't he. He's so kind to give his time to do that."

Excuse us, we have something in our eyes...

Thirty years after defeating the Galactic Empire, Han Solo and his allies face a new threat from the evil Kylo Ren and his army of Stormtroopers. Read More

Rory and Logan Renuite on the 'Gilmore Girls' Revival Set

5 Things We Need to See in 'Star Wars: Episode VIII'