With 'Beast' now in theaters, Moviefone counts down the twenty best movies featuring Idris Elba, from 'American Gangster' to 'Zootopia.' 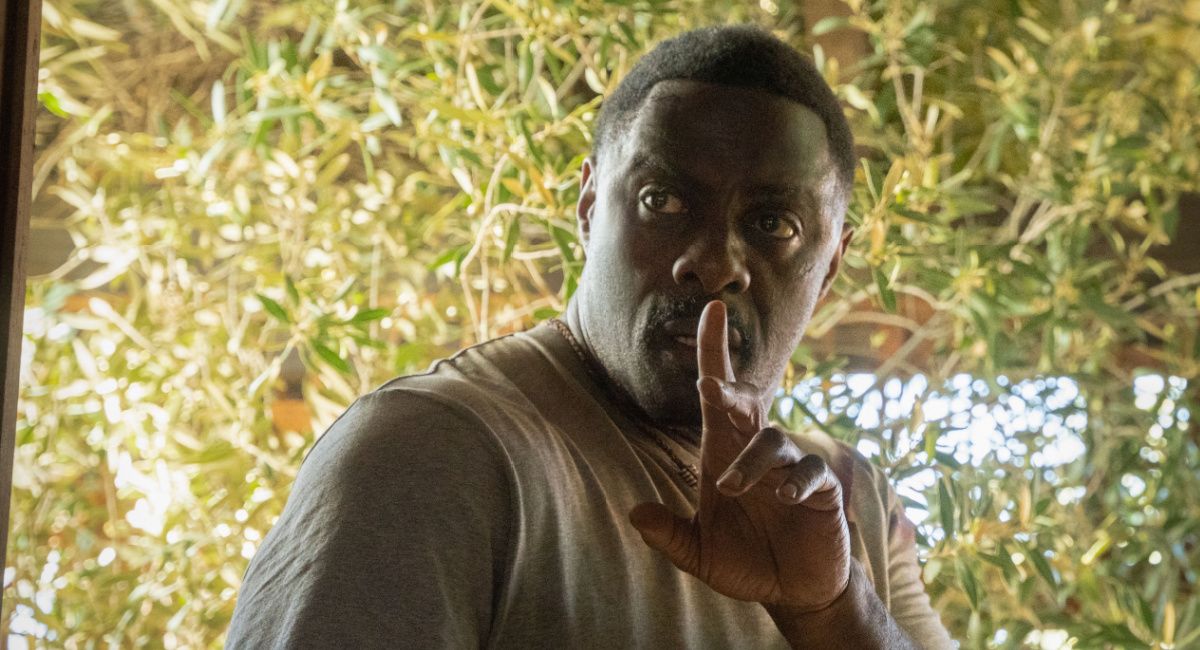 Idris Elba is one of the best actors working today!

In honor of the actor's two upcoming movies, Moviefone looks back at the twenty best movies of Idris Elba 's career.

Against his father Odin's (Anthony Hopkins) will, The Mighty Thor (Chris Hemsworth) - a powerful but arrogant warrior god - recklessly reignites an ancient war. Thor is cast down to Earth and forced to live among humans as punishment. Once here, Thor learns what it takes to be a true hero when the most dangerous villain of his world, Loki (Tom Hiddleston) sends the darkest forces of Asgard to invade Earth. Based on the Marvel Comics characters, Elba plays all-hearing Asgardian sentry Heimdall.

Stranded after a tragic plane crash, two strangers (Elba and Kate Winslet) must forge a connection to survive the extreme elements of a remote snow covered mountain. When they realize help is not coming, they embark on a perilous journey across the wilderness.

The Mountain Between Us

A team of explorers (Noomi Rapace, Michael Fassbender, Charlize Theron, and Elba) discover a clue to the origins of mankind on Earth, leading them on a journey to the darkest corners of the universe. There, they must fight a terrifying battle to save the future of the human race.

Terri (Taraji P. Henson) is a devoted wife and mother of two, living an ideal suburban life in Atlanta when Colin (Elba), a charming but dangerous escaped convict, shows up at her door claiming car trouble. Terri offers her phone to help him but soon learns that no good deed goes unpunished as she finds herself fighting for survival when he invades her home and terrorizes her family.

Things couldn't be better for Derek Charles (Elba). He's just received a big promotion at work, and has a wonderful marriage with his beautiful wife, Sharon (Beyonce). However, into this idyllic world steps Lisa (Ali Larter), a temporary worker at Derek's office. Lisa begins to stalk Derek, jeopardizing all he holds dear.

A man-cub named Mowgli (Neel Sethi) fostered by wolves. After a threat from the tiger Shere Khan (Elba), Mowgli is forced to flee the jungle, by which he embarks on a journey of self discovery with the help of the panther, Bagheera (Ben Kingsley) and the free-spirited bear, Baloo (Bill Murray).

Molly Bloom (Jessica Chastain), a young skier and former Olympic hopeful becomes a successful entrepreneur (and a target of an FBI investigation) when she establishes a high-stakes, international poker game. With her reputation in ruins and future in jeopardy, she turns to attorney Charlie Jaffey (Elba) for legal help.

The USS Enterprise crew including Captain James T. Kirk (Chris Evans) and Spock (Zachary Quinto) explore the furthest reaches of uncharted space, where they encounter a mysterious new enemy (Elba) who puts them and everything the Federation stands for to the test.

The world’s favorite blue hedgehog is back! After settling in Green Hills, Sonic (Ben Schwartz) is eager to prove he has what it takes to be a true hero. His test comes when Dr. Robotnik (Jim Carrey) returns, this time with a new partner, Knuckles (Elba), in search for an emerald that has the power to destroy civilizations. Sonic teams up with his own sidekick, Tails (Colleen O'Shaughnessey), and together they embark on a globe-trotting journey to find the emerald before it falls into the wrong hands.

Following the death of his employer and mentor, Bumpy Johnson (Clarence Williams III), Frank Lucas (Denzel Washington) establishes himself as the number one importer of heroin in the Harlem district of Manhattan after killing fellow gangster Tango (Elba). He begins buying heroin directly from the source in South East Asia and comes up with a unique way of importing the drugs into the United States. At home, he crosses paths with a dirty cop (Josh Brolin), and a crusading detective (Russell Crowe).

A seasoned team of bank robbers, including Gordon Cozier (Elba), John Rahway (Paul Walker), A.J. (Hayden Christensen), and brothers Jake (Michael Ealy) and Jesse Attica (Chris Brown) successfully complete their latest heist and lead a life of luxury while planning their next job. When Ghost (Tip "T.I." Harris), a former member of their team, is released from prison he convinces the group to strike an armored car carrying $20 million. As the "Takers" carefully plot out their strategy and draw nearer to exacting the grand heist, a reckless police officer inches closer to apprehending the criminals.

On a mission deep in the Bolivian jungle, a team of elite commandos led by Franklin Clay (Jeffrey Dean Morgan) and William Roque (Elba) finds itself on the receiving end of a lethal betrayal. Now presumed dead, the men join forces with a mysterious operative named Aisha (Zoe Saldana) to hunt down their enemy and even the score. Based on the DC Comics characters.

Directed by Guillermo del Toro, as war between humankind and monstrous sea creatures wages on, a former pilot (Charlie Hunnam) and a trainee (Rinko Kikuchi) are paired up to drive a seemingly obsolete special weapon in a desperate effort to save the world. Elba plays commanding officer Marshal Stacker Pentecost.

Determined to prove herself, Officer Judy Hopps (Ginnifer Goodwin), the first bunny on Zootopia's police force, jumps at the chance to crack her first case - even if it means partnering with scam-artist fox Nick Wilde (Jason Bateman) to solve the mystery. Elba plays Chief Bogo, an African buffalo who is the police chief of the Zootopia Police Department's 1st Precinct.

Ever since US Diplomatic Security Service Agent Luke Hobbs (Dwayne Johnson) and lawless outcast Decker Shaw (Jason Statham) first faced off, they just have traded smack talk and body blows. But when cyber-genetically enhanced anarchist Brixton's (Elba) ruthless actions threaten the future of humanity, they join forces to defeat him.

A chronicle of Nelson Mandela's (Elba) life journey from his childhood in a rural village through to his inauguration as the first democratically elected president of South Africa.

Based on the experiences of Agu (Abraham Attah), a child fighting in the civil war of an unnamed, fictional West African country. Follows Agu's journey as he's forced to join a group of soldiers led by Elba's Commandant. While he fears his commander and many of the men around him, his fledgling childhood has been brutally shattered by the war raging through his country, and he is at first torn between conflicting revulsion and fascination.

Beasts of No Nation

When fifteen-year-old Cole (Caleb McLaughlin) is expelled from school in Detroit, he is sent to North Philadelphia to live with Harp (Elba), his estranged father. Harp finds solace in rehabilitating horses for inner city cowboys at the Fletcher Street Stables, a real-life black urban horsemanship community that has provided a safe haven for the neighborhood residents for more than 100 years.

Torn between his growing respect for his father's community and his reemerging friendship with troubled cousin Smush (Jharrel Jerome), Cole begins to reprioritize his life as the stables themselves are threatened by encroaching gentrification.

Gunning for revenge, outlaw Nat Love (Jonathan Majors) saddles up with his gang to take down enemy Rufus Buck (Elba), a ruthless crime boss who just got sprung from prison.

The Harder They Fall

Welcome to Belle Reve, the prison where the worst Super-Villains are kept and where they will do anything to get out, even join the super-secret Task Force X. Today's  assignment? Assemble a collection of cons, including Bloodsport (Elba), Peacemaker (John Cena), Ratcatcher 2 (Daniela Melchior), King Shark (Sylvester Stallone), and everyone's favorite psycho, Harley Quinn (Margot Robbie).

Now arm them heavily and drop them on the enemy-infused island of Corto Maltese. Trekking through a jungle teeming with militant adversaries and guerrilla forces at every turn, the Squad is on a search-and-destroy mission with only Colonel Rick Flag (Joel Kinnaman) on the ground to make them behave, and Amanda Waller's (Viola Davis) government techies in their ears, tracking their every movement. And as always, one wrong move and they're dead (whether at the hands of their opponents, a teammate, or Waller herself). If anyone's laying down bets, the smart money is against them all!

8 Great Chris Evans Performances That Aren't Part of the MCU