20 Best Sword and Sorcery Movies of All Time!

In honor of the premiere of 'The Lord of the Rings: The Rings of Power,' Moviefone counts down the twenty greatest sword and sorcery movies of all time. 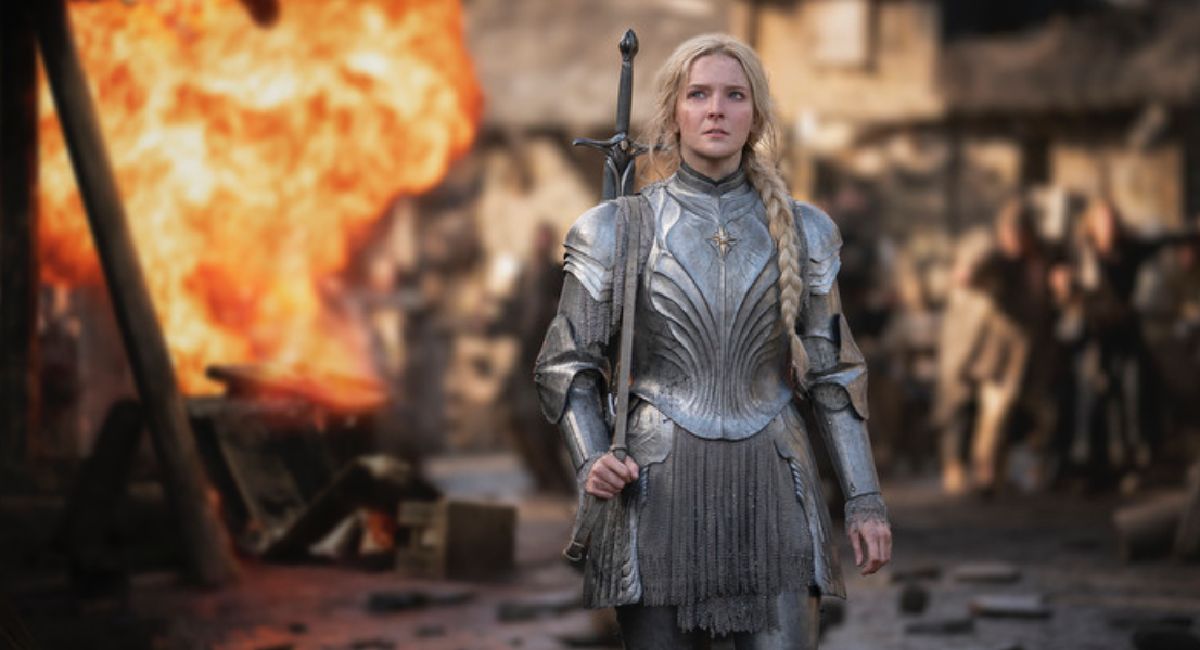 Morfydd Clark as Galadriel in Prime Video's 'The Lord of the Rings: The Rings of Power.' Photo: Ben Rothstein/Prime Video. Copyright: Amazon Studios.

Sword and sorcery is a sub-genre of fantasy stories characterized by sword-wielding heroes engaged in exciting and violent adventures, with elements of romance, magic, and the supernatural.

With a prequel to 'Game of Thrones,' 'House of the Dragon' currently airing on HBO, and 'The Lord of the Rings: The Rings of Power' debuting on Prime Video, it is clear that the sword and sorcery genre is more popular now than ever.

In honor of the release of 'The Rings of Power,' Moviefone counts down the twenty greatest sword and sorcery movies of all time.

To be included on this list, the film in question must feature at least one character wielding a sword, and some element of magic introduced in the plot.

When the child Arthur’s father is murdered, Vortigern (Jude Law), Arthur’s uncle, seizes the crown. Robbed of his birthright and with no idea who he truly is, Arthur (Charlie Hunnam) comes up the hard way in the back alleys of the city. But once he pulls the sword Excalibur from the stone, his life is turned upside down and he is forced to acknowledge his true legacy... whether he likes it or not.

King Arthur: Legend of the Sword

In an ancient time when majestic fire-breathers soared through the skies, a knight named Bowen (Dennis Quaid) comes face to face and heart to heart with the last dragon on Earth, Draco (voiced by Sean Connery). Taking up arms to suppress a tyrant king, Bowen soon realizes his task will be harder than he'd imagined: If he kills the king, Draco will die as well.

The Hobbit: An Unexpected Journey (2012)

Bilbo Baggins (Martin Freeman), a hobbit enjoying his quiet life, is swept into an epic quest by Gandalf the Grey (Ian McKellen) and thirteen dwarves who seek to reclaim their mountain home from Smaug, the dragon.

The Hobbit: An Unexpected Journey

Conan (Arnold Schwarzenegger) is commissioned by the evil queen Taramis (Sarah Douglas) to safely escort a teen princess and her powerful bodyguard to a far away castle to retrieve the magic Horn of Dagoth. Unknown to Conan, the queen plans to sacrifice the princess when she returns and inherit her kingdom after the bodyguard kills Conan. The queen's plans fail to take into consideration Conan's strength and cunning and the abilities of his sidekicks: the eccentric wizard Akiro (Mako), the warrior woman Zula (Grace Jones), and the inept Malak (Tracey Walter). Together the hero and his allies must defeat both mortal and supernatural foes in this voyage to sword-and-sorcery land.

A rogue prince (Jake Gyllenhaal) reluctantly joins forces with a mysterious princess (Gemma Arterton) and together, they race against dark forces to safeguard an ancient dagger capable of releasing the Sands of Time – gift from the gods that can reverse time and allow its possessor to rule the world.

Prince of Persia: The Sands of Time

In his homeland of Alagaesia, a farm boy (Ed Speleers) happens upon a dragon's egg -- a discovery that leads him on a predestined journey where he realized he's the one person who can defend his home against an evil king.

Set in a timeless mythical forest inhabited by fairies, goblins, unicorns and mortals, this fantastic story follows a mystical forest dweller (Tom Cruise), chosen by fate, to undertake a heroic quest. He must save the beautiful Princess Lili (Mia Sara) and defeat the demonic Lord of Darkness (Tim Curry), or the world will be plunged into a never-ending ice age.

The tyrant Gedren (Sandahl Bergman) seeks the total power in a world of barbarism. She raids the city Hablac and kills the keeper of a talisman that gives her great power. Red Sonja (Brigitte Nielsen), sister of the keeper, sets out with her magic sword to overthrow Gedren.

A prince (Kenneth Marshall) and a fellowship of companions set out to rescue his bride (Lysette Anthony) from a fortress of alien invaders who have arrived on their home planet.

In ancient Egypt, peasant Mathayus (Dwayne Johnson) is hired to exact revenge on the powerful Memnon and the sorceress Cassandra (Kelly Hu), who are ready to overtake Balthazar's village. Amid betrayals, thieves, abductions and more, Mathayus strives to bring justice to his complicated world.

Frodo (Elijah Wood) and Sam (Sean Astin) are trekking to Mordor to destroy the One Ring of Power while Gimli (John Rhys-Davies), Legolas (Orlando Bloom) and Aragorn (Viggo Mortensen) search for the orc-captured Merry (Dominic Monaghan) and Pippin (Billy Boyd). All along, nefarious wizard Saruman (Christopher Lee) awaits the Fellowship members at the Orthanc Tower in Isengard.

The Lord of the Rings: The Two Towers

He fought his first battle on the Scottish Highlands in 1536. He will fight his greatest battle on the streets of New York City in 1986. His name is Connor MacLeod (Christopher Lambert). He is immortal.

Captain Etienne Navarre (Rutger Hauer) is a man on whose shoulders lies a cruel curse. Punished for loving each other, Navarre must become a wolf by night whilst his lover, Lady Isabeau (Michelle Pfeiffer), takes the form of a hawk by day. Together, with the thief Philippe Gaston (Matthew Broderick), they must try to overthrow the corrupt Bishop (John Wood ) and in doing so break the spell.

The evil Queen Bavmorda (Jean Marsh) hunts the newborn princess Elora Danan, a child prophesied to bring about her downfall. When the royal infant is found by Willow (Warwick Davis), a timid farmer and aspiring sorcerer, he's entrusted with delivering her from evil. Joanne Whalley and Val Kilmer also star.

To win the right to marry his love, the beautiful princess Andromeda (Judi Bowker), and fulfil his destiny, Perseus (Harry Hamlin) must complete various tasks including taming Pegasus, capturing Medusa's head, and battling the Kraken monster.

Clash of the Titans

"You will feel the power. Live the adventure. Experience the fantastic!"
69
PG1 hr 58 minJun 12th, 1981
Watch Clash of the Titans Online

Young hobbit Frodo Baggins (Elijah Wood), after inheriting a mysterious ring from his uncle Bilbo (Ian Holm), must leave his home in order to keep it from falling into the hands of its evil creator. Along the way, a fellowship is formed to protect the ringbearer and make sure that the ring arrives at its final destination: Mt. Doom, the only place where it can be destroyed.

A horde of rampaging warriors massacre the parents of young Conan and enslave the young child for years on The Wheel of Pain. As the sole survivor of the childhood massacre, Conan (Arnold Schwarzenegger) is released from slavery and taught the ancient arts of fighting. Transforming himself into a killing machine, Conan travels into the wilderness to seek vengeance on Thulsa Doom (James Earl Jones), the man responsible for killing his family. In the wilderness, Conan takes up with the thieves Valeria (Sandahl Bergman) and Subotai (Gerry Lopez). The group comes upon King Osric (Max von Sydow), who wants the trio of warriors to help rescue his daughter who has joined Doom in the hills.

Aragorn (Viggo Mortensen) is revealed as the heir to the ancient kings as he, Gandalf (Ian McKellen) and the other members of the broken fellowship struggle to save Gondor from Sauron's (Christopher Lee) forces. Meanwhile, Frodo (Elijah Wood) and Sam (Sean Astin) take the ring closer to the heart of Mordor, the dark lord's realm.

The Lord of the Rings: The Return of the King